Backus was a Native Floridian artist of great importance recreating scenes of Florida's sky, rivers, ocean, back country, unpredictable weather, clouds, and birds.
Born in Fort Pierce, FL to a family of talented boat designers and builders, Backus's father owned a boat shop in Fort Pierce.
The boat shop would become an important influence in his works.
His great memory helped bring many of his childhood memories into becoming a naturalist.
Beanie's first job, other than helping to paint boats, was painting landscapes in the window of Swan's Store in the 8th grade before moving on to advertising posters for the local motion picture Sunrise Theatre.
His "Uncle" Reg Goodwin helped Backus as a young painter go to the Parsons School of Fine Art in New York in 1924.
Beanie's first art exhibit took place in 1931 and soon after his first recognition outside the local area would be winning the Bemus Award in Palm Beach in 1936. The Bemus Sward was given for the best painting of a Florida subject.
Several years later, Backus was becoming a well known, multi award winning artist.
He was referred to as “Florida’s painter laureate,” and the “Dean of Florida’s landscape painters.” 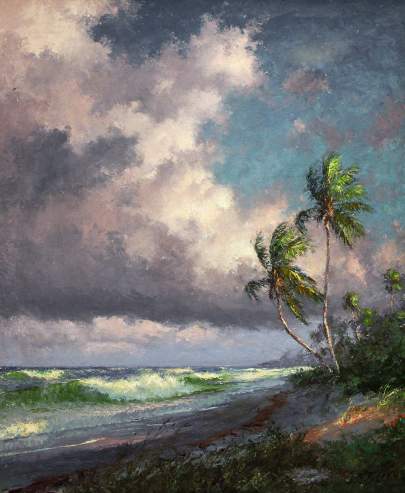 Backus spent a lifetime teaching, encouraging, and influencing many artists.
He even started art classes for children for fifty cents a lesson in 1952, doing this for well over 10 years.

In addition to his influence on the Florida Highwaymen painters (Alfred Hair being the only Highwaymen artist that took lessons with Backus),
there is an unknown number of Backus students.
Many of these artists got started by visiting the Backus Studio, in Fort Pierce.
These artists are referred to as the "Indian River School" of painters.

Some of these artists include: